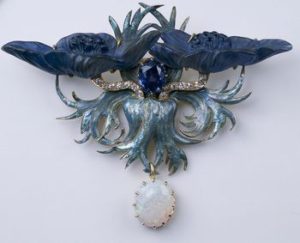 René Lalique, a genius, a legend.

” Il faut que ca soit beau, il faut un âme”
It is mid 19th Century and Paris is boiling, the cultureclimate is sparkling and the industrial revolution is about to change the world completely. 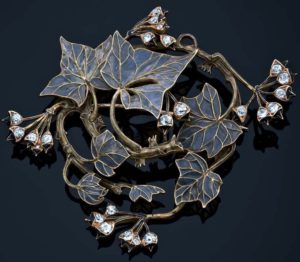 People move from the countryside to find work in the cities. Victor Hugo publish his novel Les Miserables 1862, Claude Monet and his friends in the Anonymous Soceity of Painters, Sculptors, and Printemakers etc, exhibit in Pris 1874 and the expression  ”Impressionism” is born from the painting ”Impression, soleil levant ” by Monet. The Paris Operahouse ”Opera Garnier” is built during 1861-1875 and becomes a proud elitistic signature for the classique culture in Paris. Opera Garnier was the inspiration to Gustav Leroux who placed his novel ”Phantom of the Opera” here in that the legend speaks of a hidden lake under the house. The music we listen to during this period comes from carismatic caracters like Verdi, Wagner, Saint-Saëns, Richard Strauss and many more. It is in this dynamic period one of the most inventive and forever inspirational jeweler and glassartist is born. 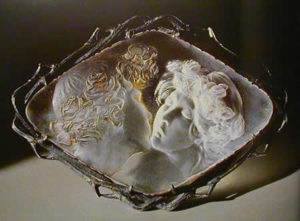 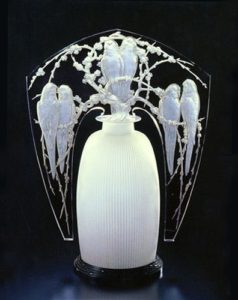 René Jules Lalique was born in the french village Ay in the district of Marne ( former Champagne) the 6th of April 1860 during the Napoleon III period, and he passed away in Paris 1945 at the age of 85 at 40 Cours la Reine,( now Cours Albert 1er) the townhouse he created for himself . Leaving behind an heritage of the most unique kind of art and industrial development in not only jewelry but in the glass industry as well, introducing the glassmassproduction by bringing the glass into the homes of everyday people where it hade not been before.
Although his familiy moved to the suburbs of Paris when René was 2 years old, the family returned to Ay for summerholidays. It was during these trips René´s faschination for the nature grew and became the most important source of inspiration for his works for the rest of his life.
When René was 12 years old (1872) he began his career by studying sketching and drawing for Lustin-Marie Laquin at Lycee Turgot. 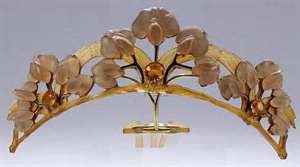 When his father Auguste Jules Lalique, a mercantile agent dies 1876, René goes to Paris to find work and he is accepted as an apprentice at the famous jewelryfirm and goldsmith Louis Aucoc, at that time one of the most popular jeweler in Paris. René was eager to learn more so he took the advantage of attending evening classes at the École des Arts et Decoratives refining his graphic design and sketching.
Louis Aucoc was leading in the Art Noveau jewelry and René learned here the design and production from the ground up.The Aucoc firm was known for its technique skills and it was natural for René Lalique to benefit from this knowhow and combine it with his brilliant design. During the two years ( 1874-1876) of apprenticeship with Louis Aucoc, ”La Maison Aucoc” was founded and René Lalique was creating the design for the firm.
After the two years he spent with Louis Aucoc he went to London and Syndenham College. At Syndenham and it´s free artistic environnement, René developes his graphic skills and devotion for naturalistic design so unique and significant for the ”Lalique spirit”. 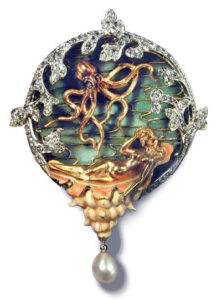 The Lalique family was related to the universe of jewelry through a relative, M Vuilleret on Rue de Santonage, and when René returned from London 1880 he began to design for him as a freelance designer. Together with August Petit he illustrated independant jewelery designs and during collaborating with Varenne who distributed his sketches to manufacturers carrying the stamp Varenne&Lalique. During a certian time he also studied sculpture for Justin Lequin at the École Bernards Palissy acheiving experience that later helped him in the designprocess.

René was an artist, and beeing an artist he was driven by his soul of art, creating the most sought for and breathtakingly beautiful designs for Cartier, Boucheron, Aucoc, Jacta, Destape etc who´s shop at Place Gallion he took over 1885.
Finally  1885 René Lalique was now able to start to manufacture his own design with decors inspired by Antiquity and Japonism. 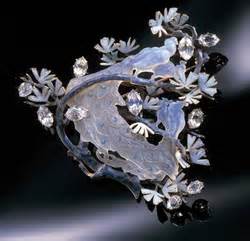 It is not the sizes of the gemstones, nor the weight of gold that matters to Lalique, instead the motiv, the expression, the delicacy of it´s look using in combination translucent enamels, glass, semiprecious stones, gold, horns, and pearls to get the impression right and the unique spirit of his work and soul. The source of inspiration was natural motives and Japonism and every piece of Jewelry has it´s own story. The romantic fairytale mystery world seen in his motifs, captures the world and his works are displayed in the windows of the most famous jewelers in Paris such as the shop of Siegfried Bing, the Maison of l´Art Nouveau. Sarah Bernardt asks him to design jewelery for her as well, and 1905 at the age of 45 he opens his first retailshop at Place Vendôme in Paris. It is here he introduces the first design of a perfumebottle made in glass for Francoise Coty.

Perfumebottles are today collectors pieces and are sought for at the most prestigious Auctionhouses arond the world. I present two galleries of bottles of various ages. Enjoy. 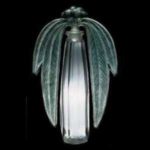 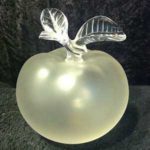 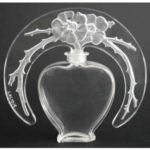 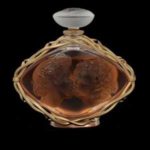 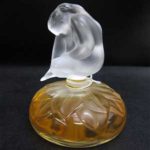 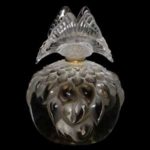 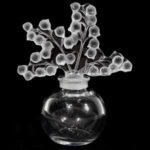 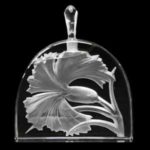 René Lalique presented himself frequently at Expositions in Paris and around the world with great success. René began already at 1889 together with Boucheron and Vever to expose, but it is 1894 he open the exhibition at Salon de la Socite des Artisans Francais. He became highly respected for his art and craftsmanship, and numerous are the prizes he won. 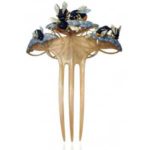 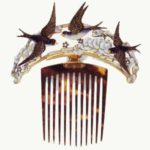 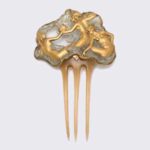 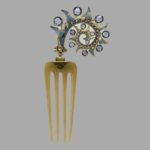 The intruiging soul behind the jewelry made by René Lalique( Emile Galle did recognize Lalique beeing ” the inventor of modern jewelry”)is no doubt the Myths,and he was inspired by the Symbolism art movement. 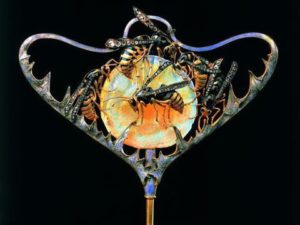 The spectular combinaton of different materials, the colours, and the motifes such as butterflies, insekts, flowers, serpents, women partly human partly animal put together in a variety of delicate materials such as 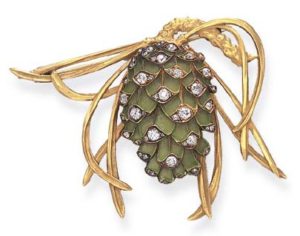 gold enamel glass etc. When he created broches in glass he adopted the technique used in the English Georgian period. This means that the broches had closed backs and between the metal and the glass was a foil that reflected light and added colour to create a shimmering effect. Rene´Lalique embodies the essence of la Belle Epoque. His splendour in craftsmanship and the  beauty together with the sensibility for details in the most romantic way attrachted royalities actresses and collectors all around the world. The most wellknown was Calouste Gulbenkian the son of an Armenian oil baron who very early, (despite the critisims Rene´was experiencing in the beginning), supported and bought for his collections an impressive amount of Jewelry. René came to know Gulbenkian through his patronne Mlle Sarah Bernardth. 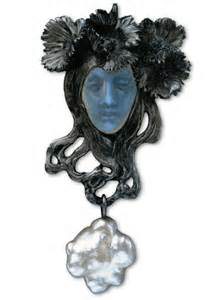 From 1905 Rene´Lalique turn his creatingdevotion to the glass, and we see over the following years to come a wide production of magnificent pieces such as splendid glass doors in La Belle Epoque style not only for L´Orient Express but for many others . 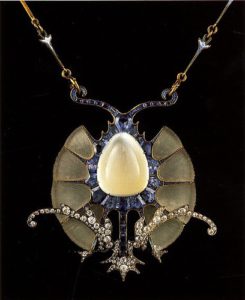 René Lalique dies 1945 after a wonderful life bringning 6 children to life, two wifes and a creative period over two worldwars. Experiencing the invention of the electricity, the car, the airplane, the phone etc. Yet René remained fidel to his inspiration from the nature his so deeply fell in love with as a child in his village Ay.Maître René Lalique is resting at the Pere Lachaise semitary , Paris.

Dear Friends,
Indeed there is so much more to read about this genious especially the glassperiod, and his developpements within this area. The links might help you on you research to discover one of the most influencial artists as well as entrepreneurs during the last century, 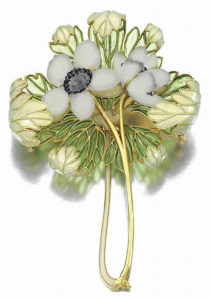 The photos in this blog are found in the pages linked to the links above and these links are intruiging indeed.
My kindest and warmest regards, 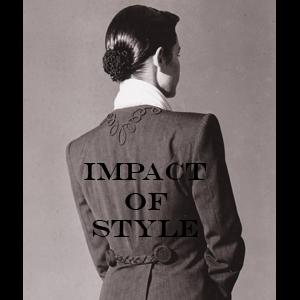